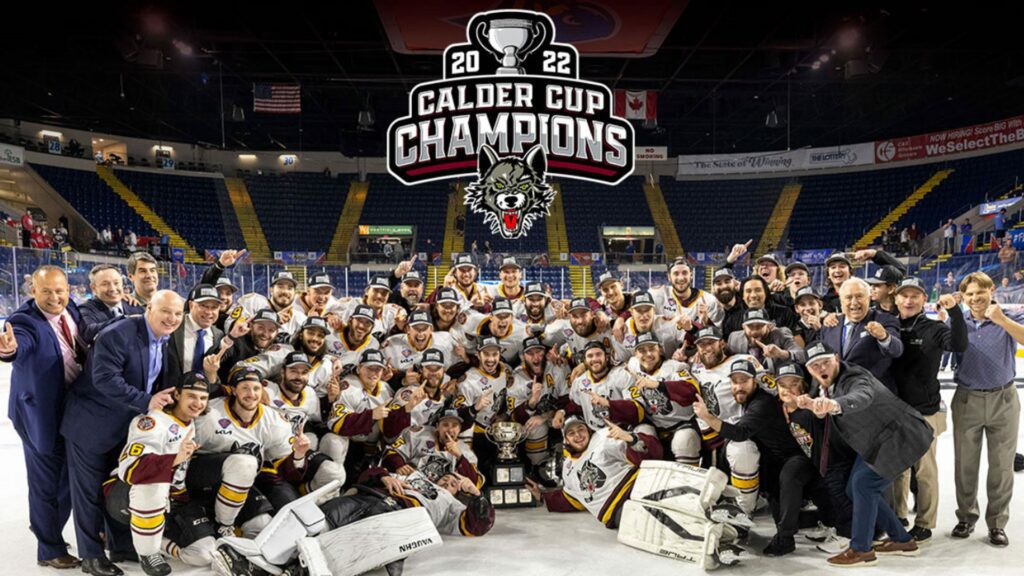 Alex Lyon stopped all 28 shots he faced as the Chicago Wolves wrapped up their fifth league championship with a 4-0 victory over the Springfield Thunderbirds Saturday (June 25) night in Game 5 of the Calder Cup Finals.
Captain Andrew Poturalski, Orland Park native David Gust, postseason Most Valuable Player Josh Leivo and defenseman Max Lajoie scored for the Wolves (14-4 playoff record), who swept four games in six days from Springfield after suffering an overtime loss in Game 1.
Chicago became the first American Hockey League team in 22 years to produce two shutouts in the finals while earning the right to raise a 2022 Calder Cup Champions banner at Allstate Arena that will go next to the ones for the 1998 Turner Cup, 2000 Turner Cup, 2002 Calder Cup and 2008 Calder Cup.
“Credit to these players, man, they’re something special,” said Wolves head coach Ryan Warsofsky. “We wanted to get a group together to do something special. And it was never about winning a championship in November. That was not the message. It was, ‘Let’s have a really good day today and get better and win that day.’ I think you have to play for each other and you have to want something bigger than yourself.
“Every guy in there bought into it. We preached it day-in and day-out and they probably can’t stand me for it. But this is the moment we wanted right here.”
Springfield goaltender Charlie Lindgren denied the Wolves early with two highlight-reel glove saves, but Chicago maintained consistent pressure and wound up scoring the opening goal for the 12th game in a row thanks to Lajoie.
He chased down an errant shot along the left half-wall, scooted in and fired a shot that was blocked and came back to his stick. He chipped another shot that banked off Springfield defenseman Matthew Kessel’s upper body and across the goal line for a 1-0 lead at 18:39 of the first.
“I tried to hit (Ivan Lodnia) back-door and then got the puck back,” Lajoie said. “I just tried to put it on net. I think it went off their ‘D,’ but it’s a good bounce for us.”
The Wolves finally earned their first power-play opportunity at 15:29 of the second period — and they didn’t waste time taking advantage. Joey Keane collected a Jack Drury pass at the right point and whistled a rising wrister into traffic that Poturalski tipped from the slot for a 2-0 lead at 16:01.
Chicago all but clinched the Cup with 2:58 left in regulation when Drury raced down the left wing on a 2-on-1, eased around a defenseman and dished to Gust on the doorstep for a quick flip that gave the Wolves a 3-0 lead.
Springfield pulled Lindgren with 2:28 left for an extra attacker, but the Wolves (50-16-5-5 in regular season) made them pay when Poturalski set up Leivo for an empty-net goal with 23 seconds left. Shortly thereafter, the AHL’s regular-season champions celebrated their Calder Cup title by mauling each other near Lyon’s net.
Lyon pushed his postseason record to 9-3 with his second shutout of the playoffs while Lindgren (5-3) rejected 26 of 29 shots in the loss.