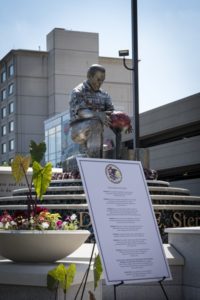 Donald E. Stephens was mayor of the Village of Rosemont, Illinois, a suburb of Chicago, from the time of Rosemont’s incorporation in 1956, until his death in 2007. The pioneering mayor was in his 14th term and had served 51 years, making him one of the longest serving incumbents in U.S. history.

You didn’t have to know Mayor Donald E. Stephens well to understand the affection he had for the Village of Rosemont and its residents. Whether you just met him on the street or were privileged to spend significant time with him, he would quickly tell you about the latest development he envisioned for literally every corner he passed.

Despite his larger-than-life presence, his natural leadership, his charisma, his quick wit and his unprecedented success as a mayoral CEO, his favorite pastime was stopping in at the local restaurant in the morning for coffee and what else? – a chat about Rosemont, of course. He was as likely to have breakfast with a local resident as a top executive. He always liked to hear about new ideas.

Although the early years were challenging, it seemed like it wasn’t that long before Mayor Stephens and Rosemont trustees began paving the streets with gold, growing the town’s economy, increasing employment opportunities and providing excellent municipal services for very low taxes. lt was all a remarkable feat when one considers the adversity he overcame in his youth.

Raised on the northwest side of the city by hard-working parents, Don suffered the terrible early loss of his father and his family’s subsequent economic struggles. Don became a reservist, later earning his GED. He played semi-professional football, and though he looked tough on the outside – and he was – he also had the biggest heart in the world. He married, and his first son, Donald E. Stephens II, was born.

Smart and resourceful, Don Stephens left his job downtown with a renowned insurance company to start his own insurance business -- right in his own garage. He became an extremely successful independent entrepreneur.

As his business and family grew, so did his neighborhood. Soon it became necessary to organize a homeowners’ association. When nearby suburbs declined to annex what was little more than a subdivision, Don Stephens studied the Illinois Municipal Code and led his neighbors into incorporating the town. The 84 founding pioneers elected him mayor and picked the new name of their town -- Rosemont -- out of a hat.

It was 1956 and everything was possible. At that time, Midway Airport, on the city's southwest side predominated, and O’Hare International Airport was little more than a service depot. But farsighted Mayor Donald E. Stephens saw O'Hare’s tremendous potential, took advantage of it and the village grew at a sure, steady pace until the 1970’s.

Rosemont didn’t grow just because of its proximity to O’Hare. It has been said that hotel corporations decided on their own to build properties there. In fact, the hotels could have sprung up in any suburb around O’Hare. Why did the hoteliers choose Rosemont? Because Mayor Don Stephens and the village trustees were  focused on developing the town into a meeting and convention capital. They held onto the opportunities before them as O’Hare grew.

So Mayor Stephens and village officials persuaded the Pritzker family to build a Hyatt property directly across the street from a warehouse that the village was in the process of converting into a convention center. The Hyatt House opened in 1972, and the O’Hare Exposition Center opened in 1975.

Mayor Stephens poured Rosemont’s resources into the development of that convention center and created a new source of revenue in the process.

Mayor Stephens made good on his promise to work hard to attract convention business, and today, the Donald E. Stephens Convention and Conference Center is routinely ranked between #10 and #12 in the industry and is the anchor of Rosemont’s economy.

The Stephens Center has nearly one million square feet and attracts 1.35 million visitors to more than 100 events annually. Both business travelers and consumers are drawn to it, because approximately half of the events it presents are industry tradeshows and expositions; the other half are public shows selling consumer goods and services. The Stephens Center set the stage for the development of the 19,000-seat Allstate Arena, completed in 1980, and the Rosemont Theatre, which opened in 1995.

Just like the Stephens Center, the Allstate Arena is a highly successful venue. It is ranked consistently among the top stadia in the world by Pollstar.

Originally named the Rosemont Horizon, the Allstate Arena was the first major indoor stadium (19,000 seats) to be constructed in the Chicago metropolitan area in nearly 50 years, when it opened. It is home to the Chicago Wolves, the Chicago Sky, and is the host site for dozens of world-class music, entertainment and family shows annually.

Following the creation of the stadium, Mayor Don Stephens and village officials were able to negotiate a number of commercial real estate developments, especially hotels and office buildings.

There were two things that made Don Stephens one of America’s smartest CEO’s, according to a prominent Chicago business editor: The first was his vision; the second was his ability to seize opportunity and get things done.

He also was simply a great salesman. Whether he was representing Rosemont to the financial community or leading one of his marketing teams in a chase to win a large tradeshow contract for the Stephens Center, he always won.

He took Rosemont and turned it around from being a raw, scrappy and flood-ridden community into a sparkling capital of hospitality, featuring world–class hotels, renowned restaurants, and a plethora of entertainment offerings.

While hospitality and entertainment became and have continued to be the top industry in Rosemont, the world of commercial real estate is a close second.

History will show that the real reasons for most of Rosemont’s remarkable success were Mayor Stephens’ love for the Village of Rosemont, and especially, his love for his family. His family members will tell you he wanted to ensure that the village would be so special, safe and fun, that all of his progeny (four children, 14 grandchildren and seven great-grandchildren, to date) would see it as the best possible place for them to live and raise their own families.

Under Mayor Don Stephens’ leadership, Rosemont’s successful growth and progress turned it into a thriving and busy hub of business, commerce and transportation. It should be held up as the gold standard for community ingenuity.

Four of the many buildings which he helped develop are depicted with him: The Donald E. Stephens Convention Center, the Allstate Arena, the village’s Water Tower and the Hyatt Regency O’Hare hotel.

One of Mayor Don Stephens’ favorite sayings appears on the marble wall backdrop of the monument: “The Village is a business and the voters are my boss. They’ve hired me to do what’s best for them and the future of Rosemont.” And he did.