M.I. Hummel Figurines
Barely out of childhood hersself, Sister Maria Innocentia Hummel was creating drawings of children and religious art as rewards for her young art students at schools administered by her covent - the Siessen Covent in Southwestern Germany.  The accomplished young nun was a gradaute of the Munich's Academy of Applied arts and a brand new member of the Franciscan order in 1993, when her art cards were well received at an educational symposium and found their way to a reigious art store in Munich.  There her drawings caught the eye and the imagination of a "porzelliner" - a master porcelain maker trained in Bavarian-Thuringian traditions and head of a renowned porcelain factory - W. Goebel Porzellanfabrik.  "Porzelliner" Franz Goebel wrote to Sister Maria Innocentia Hummel and thus began a collaborationwhich resulted in the production of millions of charming little ceramic figurines of Bavarian children and religious subjects populary known as M. I. Hummels.  For decades, M.I. Hummel figurines have been some of the world's most beloved and renownedof all ceramic figurines.

The House of Anri
Anton Riffeser carried on the woodcarvlng tradition established by his father, Alois Riffeser, high in the Dolomite Mountains of the Italian Tyrol. Although Anton did not establish the House of ANRI until after World War I and five years of detention In a Siberian prisoner-of-war camp, he had begun the practice of his craft in the early 1900s when he was oniy a boy. Anton not only featured local Groedener woodcarvlng art at the House of ANRI, but used bis company as the springboard for the creation of wooden figurines by the Internationally renowned late artist Juan Ferrandlz, whose work Is exhibited at the museum. The figures are carved from 100-year-old Alpine Maples, and use children, animals, religious themes and Alpine themes (such as horse-drawn wagons) as subjects. Take time to look at the two largest carvings in the museum <"Golden Blossom' and "Edelweiss," both of which are Ferrandiz creations and carved by master carver Emmerich Mussner. Mr. Ferrandlz' Spanish heritage is exemplified In his art, in which he expresses his belief that children are the hope and salvation of the world.

W. Goebel Porzellanfabrik
Franz Detlev Goebel with his son Friedrich William Goebel founded the company in 1871 in Rodental, Bavaria.  In the mid- 1910’s-1920’s a third generation, Max Louis Goebel had taken turned the company into a manufacturer of fine earthenware products.  His son Franz Ernst Goebel developed a line of porcelain figures.

By the 1930’s Sisters Maria Innocentia’s religious notecards got the attention of Franz.  He gained permission from M.I. Hummel to turn the children of Berta Hummel into three-dimensional figurines.  By 1935, forty-six figurine models were created.

During the end of WWII, the production of Goebel line dwindled.  The American occupation helped Goebel resume production.  During this time, the Hummel figurines were cherished by U.S. servicemen and their popularity increased.

Today, Goebel is still manufacturing in Roedental.  Their manufacturing line has expanded into other porcelain and ceramic figures. 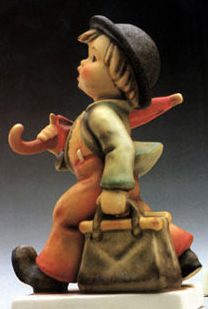 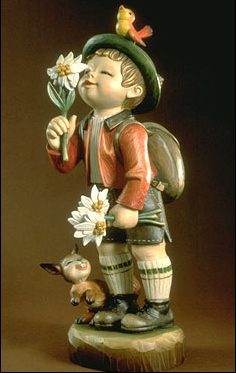 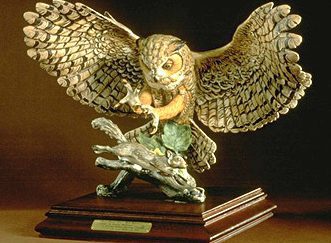