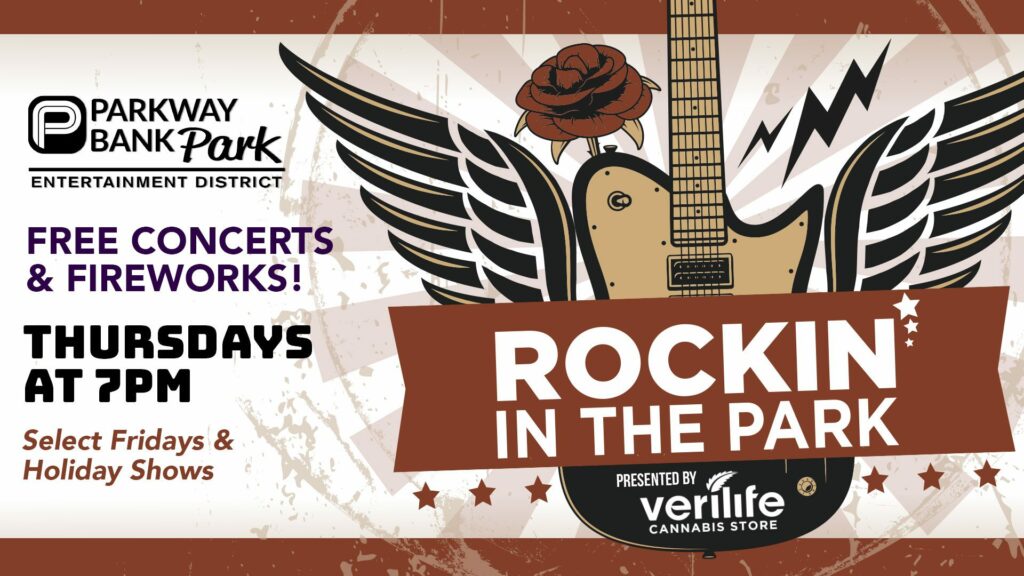 Parkway Bank Park Announces 2022 Lineup for “Rockin’ in the Park”

Rosemont, Ill. – Rosemont’s Parkway Bank Park entertainment district (5501 Park Place, Rosemont) will kick off its summer season with the return of the “Rockin’ in the Park” free summer concert series. The 2022 series will begin Sunday, May 29. Free concerts will continue every Thursday and select Fridays and holiday evenings from June 2 through September 1, featuring music by classic cover bands alongside food and beverage tents on the park’s great lawn. Thursday night concerts will culminate with a musical fireworks display.

The 2022 Rockin’ in the Park concert series is presented by Verilife Cannabis Store. Located at 5540 Park Place at Parkway Bank Park, Verilife is committed to helping people feel better and live better by dispelling outdated perceptions associated with cannabis and encouraging a new appreciation of its many benefits. The dispensary offers a large selection of flower, edibles, vapes, concentrates and more.

The 2022 Rockin’ in the Park lineup is outlined below:

Sunday, May 29: Hi Infidelity* – Chicago’s own Hi Infidelity offers a total concert experience from start to finish. The band prides itself on covering a wide variety of rock hits, from the 80s rock classics of Journey, REO Speedwagon, Bon Jovi and Boston to today’s hits from Daughtry, Nickelback, Buckcherry and Train.

Thursday, June 2: Portrait* – Portrait is a Kansas tribute band dedicated to bringing accurate instrumentation and superb musicianship to every performance. Celebrating Kansas’ musical genius from the 70s and 80s, Portrait is dedicated to performing an array of Kansas’ music, from celebrated hits to deep cuts.

Thursday, June 16: Departure* – Celebrating 14 years, Departure recreates the look, sound and feel of the original 80s rock group, Journey. Known for their high-energy and engaging performances, Departure brings the very best of Journey to audiences of all ages.

Thursday, June 23: Southern Accents* – Southern Accents recreates the music, style and sound of Tom Petty professionally with immaculate precision and wildly contagious enthusiasm. United in their quest to offer the ultimate Tom Petty and the Heartbreakers experience, each member of the band looks the part, plays the part and lives the part.

Yachtley Crew is a group of six tenured musicians with the goal of entertaining music lovers with hits from the late 70s and early 80s. Inspired by soft rock classics, the group takes their sound seriously while having as much fun as possible when performing.

Serendipity is a pop/rock band most notable for playing a combination of popular 60’s, 70’s and 80’s covers as well as current pop hits. Serendipity has been seen and heard on live television, radio stations and commercials. They are well known for their high energy and great musicianship.

Thursday, June 30: Heart to HeartBreaker* – Heart to Heartbreaker plays homage to two of the leading women of rock, Heart and Pat Benatar. The group delivers nostalgia-packed performances embodying the looks and sounds of the legendary musicians.

Thursday, July 7: Rush Tribute Project* – The Rush Tribute Project (RTP) pays homage to Rush by combining skilled musicianship with exciting performances. Covering more than 40 years of Rush’s career, RTP recreates the sound and energy that has made Rush one of the top selling rock bands of all time.

Thursday, July 14: Ticket to the Moon* – Ticket to the Moon is an Electric Light Orchestra (ELO) tribute band hailing from Ft. Lauderdale, Fla. Composed of eight talented musicians, the group is dedicated to bringing audiences the extraordinary musical arrangements of ELO alongside stellar video production.

Thursday, July 21: Atomic Punks* – Direct from Los Angeles, Calif., this group pays tribute specifically to the glory days of Van Halen fronted David Lee Roth. Roth himself referred to the group as “the best tribute to Van Halen ever.” For more than 20 years, the Atomic Punks have been re-creating Eddie Van Halen’s classic guitar sound, while capturing all of the enthusiasm and flash Van Halen brought to the stage.

Thursday, July 28: Echoes of Pompeii* – Comprised of a 10-piece band, Echoes of Pompeii leaves no stone unturned in paying homage to Pink Floyd. Hailing from Gary, Ind., the group takes their audiences on a roller coaster journey through all eras of Pink Floyd, from the early Syd Barrett Days to the later exclusion of the Roger Waters.

Thursday, August 4: American English* – This Beatles tribute show was voted “number one” by thousands of Beatles fans. The group has won sound-a-like contests at Beatlefest® for three consecutive years, along with Illinois Entertainer of the Year. American English has shared the stage with musical headliners such as The Grassroots, The Neville Brothers, Three Dog Night, The Ides of March, Eric Burdon, The Buckinghams, The Doobie Brothers, Badfinger and Gary Senise’s Lieutenant Dan Band, among others.

Thursday, August 11: Rumours ATL* – Rumours is a Fleetwood Mac tribute band based in Atlanta. Rumours captures the energy of Fleetwood Mac at the height of their career by blending perfect harmonies, precise instrumentation and a visually engaging stage show.

Thursday, August 18: Mötley Inc.* – Mötley Inc. is a reminder why Mötley Crue was one of the greatest bands to come from the Sunset Strip. From “Red Hot” to “Dr. Feelgood” and “Girls, Girls, Girls,” the band performs iconic Mötley Crue songs and is led by Timmy Craven, the singing voice heard throughout the Mötley Crue movie “The Dirt.”

Thursday, August 25: Heartache Tonight* – From the powerful guitar duel in “Hotel California” to the shimmering harmonies of “Peaceful Easy Feeling,” Heartache Tonight delivers a true concert experience. With meticulous attention to every detail, this Eagles tribute band brings together music from all eras and embodies a rock powerhouse that produced hits for more than four decades.

Backed by a renowned rhythm section, Bee Gees Gold recreates the look and sound of the Bee Gees from the 1960s and 1970s. Featuring the detailed vocals of John Acosta as Barry, Daryll Borges as Robin and Jeff Celentano as Maurice, the band performs legendary Bee Gees tracks from early hits such as “Massachusetts” and “I Started A Joke,” to disco-era classics including “Stayin’ Alive” and “You Should Be Dancing.”

The Wayouts play tribute to 1960s garage rock. Their concerts combine raw intensity with professional musicianship in order to bring fresh life to classic songs by artists such as The Kinks and The Animals.

Thursday, September 1: Elton Rohn* – As Elton Rohn, Ron Camilleri recreates the feeling of seeing a 1970s Elton John concert. The seven-piece band has headlined more than 100 shows including festivals across Canada and the United States

About The Village of Rosemont