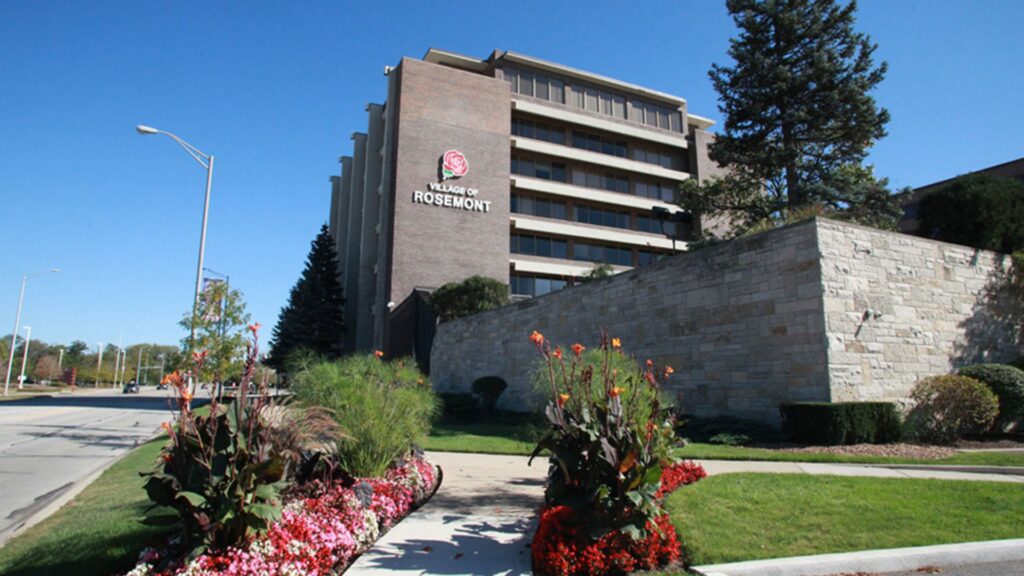 COVID-19 affected just about everyone in some way this year. Chances are, if you were lucky enough not to catch the “bug”, you knew someone who did or came close. Dodging or dealing with the pandemic became a daily thing as the coronavirus morphed and continued to take thousands of lives worldwide.

A review of Rosemont news stories published in the Journal showed no less than 10 interesting things or issues occurred in 2021 that weren’t necessarily COVID related, but still impacted local lives.

Here are the Journal’s top 10 stories of the year, Rosemont style, in no particular order. 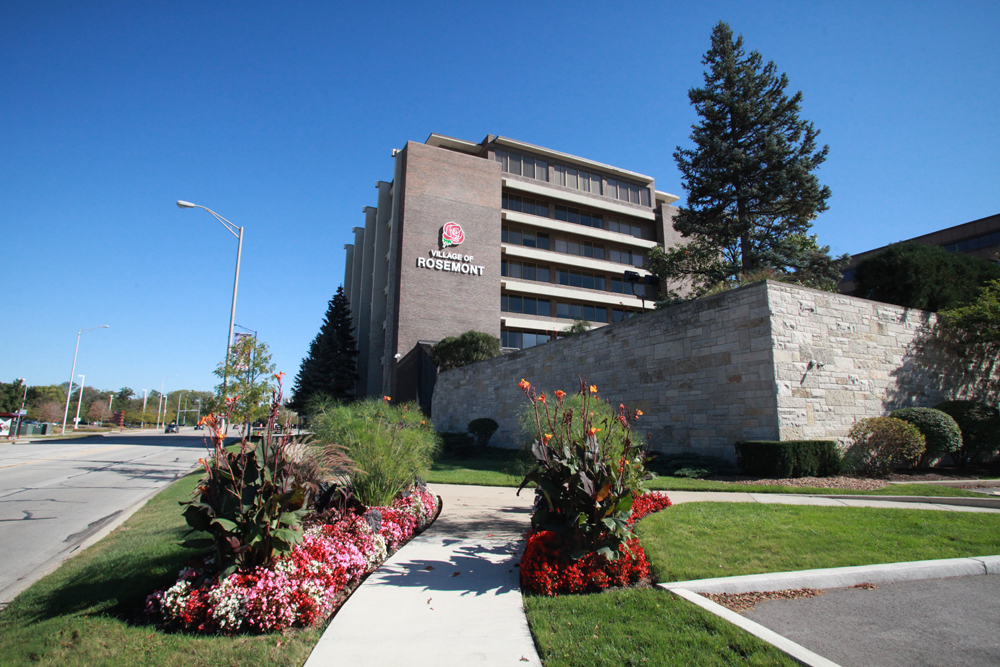 Rumblings grew louder late in the year over the village’s plans to sell the current Rosemont Village Hall and build a new facility. A new three-floor, 54,000 sq. ft. village hall will be built in the village’s Pearl District south of Balmoral Avenue and west of I-294, according to Mayor Brad Stephens. It is anticipated both the new village hall and the new Rosemont Public Safety headquarters near Allstate Arena would open around the same time in late 2023. The village sold the eight-story village hall office building on Devon Avenue for $3.8 million, Stephens said. 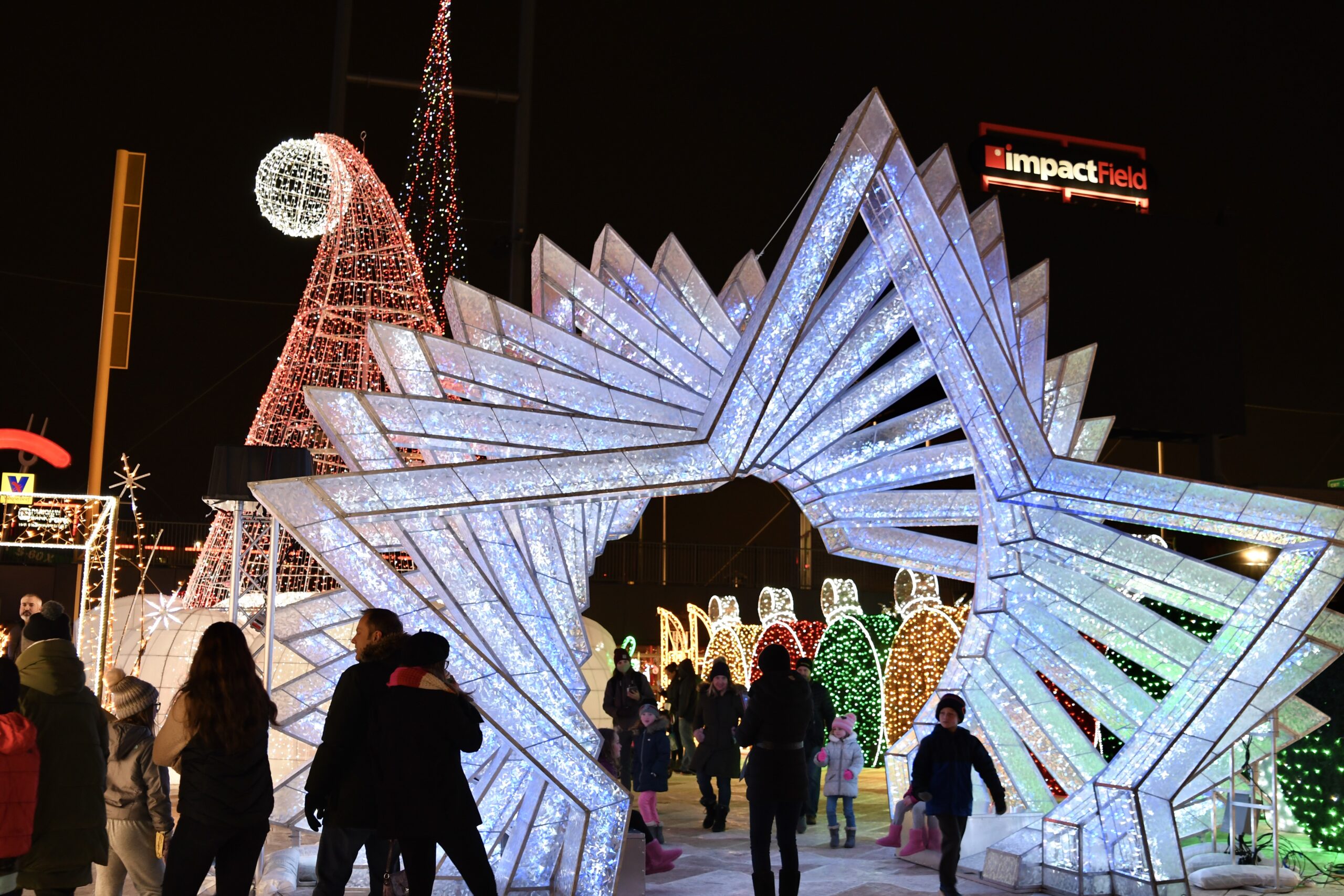 Holiday lights of all shapes and sizes were switched on for the AMAZE Light Festival at Impact Field in Rosemont. (George Almaraz/Special to the Journal)

A new use for Impact Field in Rosemont, home of the Chicago Dogs minor league baseball team, finally came to light. The AMAZE Lights Festival transformed the baseball diamond into a wonderland of lights and displays, giving the village of entertainment another draw during the winter season. The festival, which opened Nov. 19 and continues into the new year, treated visitors of all ages to a tubing hill, holiday market, food, beverages and more. Earlier in the year at Impact, the Dogs enjoyed their first appearance in the league playoffs.

Norcomm’s decision to not be part of a new emergency dispatching center in Rosemont’s next public safety headquarters caused the village to redesign plans. Citing rising costs, Norcomm Public Safety Communications, which provides dispatching services for Rosemont and 16 other police and fire departments, backed out of the move in August, and will remain in Franklin Park. The change means 19,000 sq. ft. will need to be shaved off designs for Rosemont’s new public safety headquarters, bringing the size down to approximately 85,000 sq. ft. 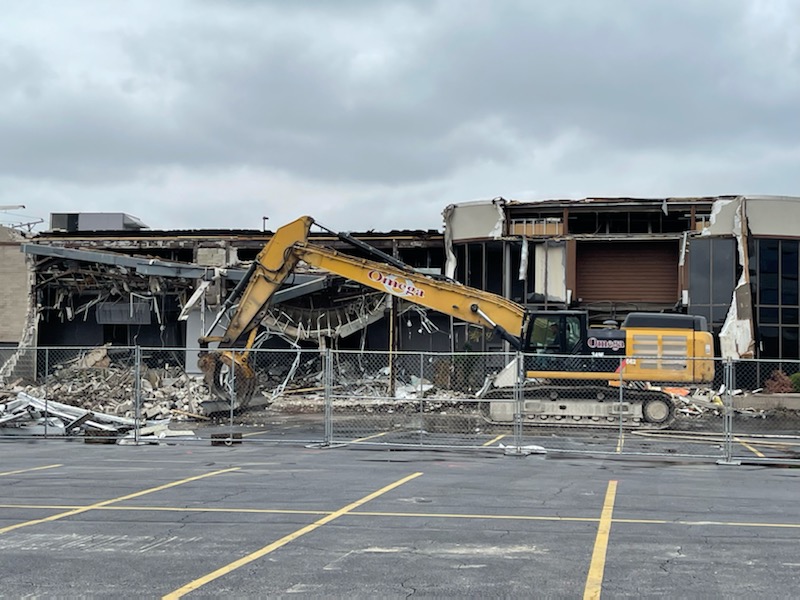 Demolition of the former Gene & Georgetti restaurant on Higgins Road west of River Road in Rosemont finally got underway Wednesday, July 21, 2021. An adjacent parking garage will also be demolished. The building was once the Rosewood Restaurant. (Kimmie Rocha/Special to the Journal)

Demolition crews brought down the former Rosewood Restaurant and adjacent village-owned parking garage on Higgins Road in July. After it was “the Rosewood,” the restaurant in more recent years became a location for local steakhouse Gene & Georgetti. However, the effects of the COVID-19 pandemic took their toll, forcing the restaurant’s closure early in the year. Demolition cleared the way for new restaurants to be built. Plans were announced for Stan’s Donuts and Small Cheval to open new locations on the site just west of River Road. 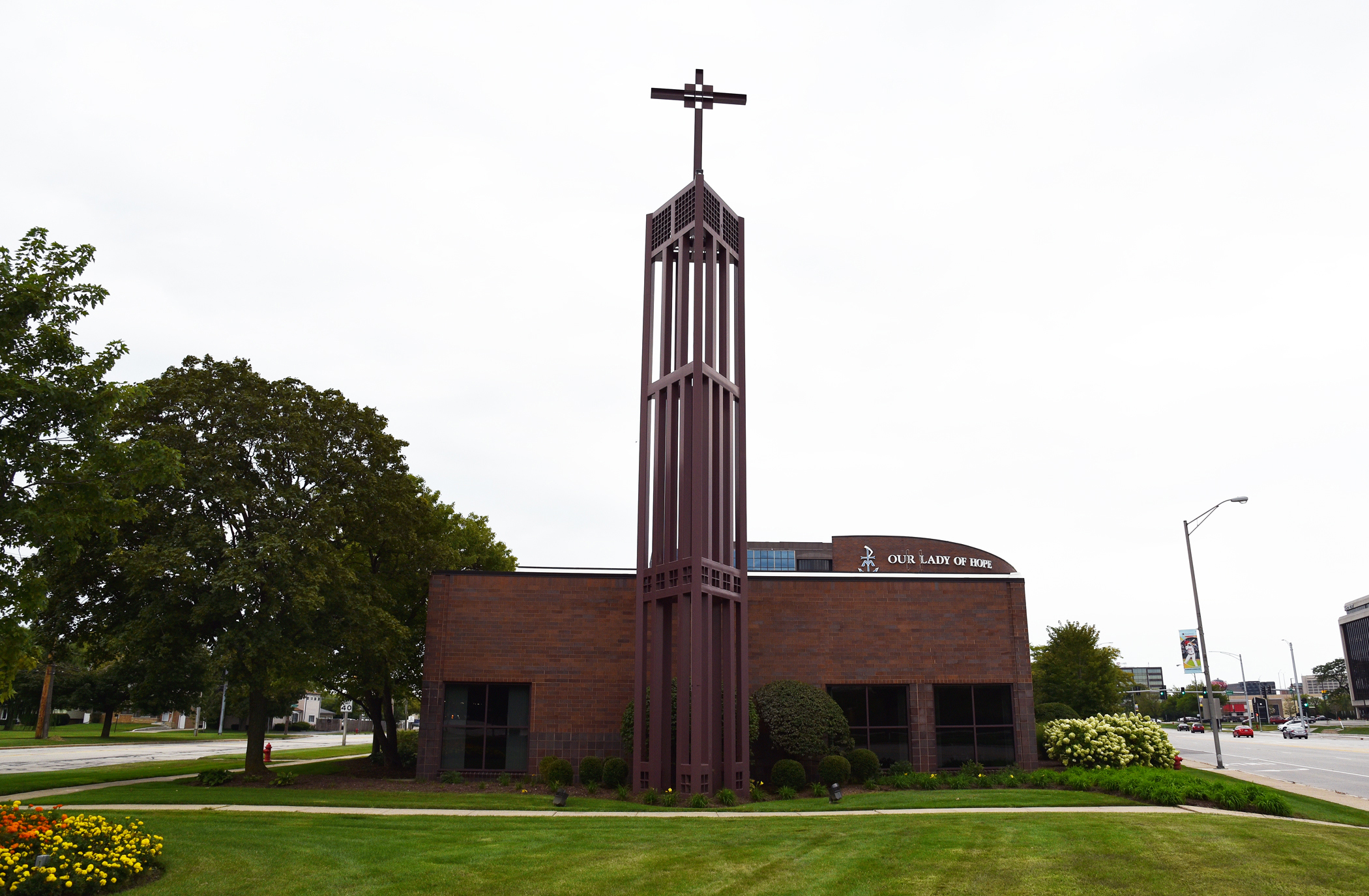 Our Lady Of Hope

Rosemont’s only house of worship became a “mission” under a reorganization plan set forth by the Archdiocese of Chicago. Under the “Renew My Church” initiative that closed or combined parishes throughout the archdiocese, Our Lady of Hope in Rosemont became a mission church to Mary, Seat of Wisdom in Park Ridge. What it also means are new purposes for Our Lady of Hope: to serve current and future parishioners in Rosemont, provide daily Mass opportunities for the area’s workers, and offer its services to travelers through O’Hare and Rosemont’s conventions.

After Pam Hogan announced her retirement as director of the Rosemont Chamber of Commerce in April, the question became who would take over as day-to-day leader of the village-backed organization that supports Rosemont-area businesses. The answer came a few months later when it was learned Edison Park’s chamber director, Melissa McIntyre, would take the job in Rosemont. The chamber’s interview board unanimously hired McIntyre who started work at the chamber in August after Hogan retired in June. 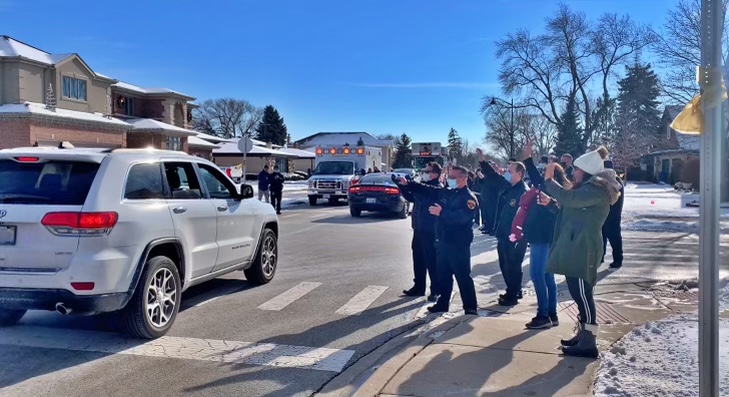 Rosemont Public Safety personnel and community members came out to support neighbor Carson Harvey after she was declared cancer free.

Well-wishers lining village streets welcomed home Rosemont’s Harvey family Jan. 13. “It was emotional and surprising,” said Michael Harvey, a sergeant and 12-year veteran of the Rosemont Public Safety Dept. Michael, wife Katie and 2-year-old daughter Carson were returning from the last of eight months of treatment for a rare form of pediatric kidney cancer found in Carson. As if that wasn’t challenging enough, ongoing COVID-19 protocols kept family members apart during most of Carson’s treatments at Lurie Children’s Hospital in Chicago. When Jan. 13 came around, Carson and family could finally celebrate: she was cancer-free. Home in Rosemont, gold ribbons were tied around trees in honor of the news.

The “hits” just kept coming for the Rosemont-owned Chicago Bandits women’s pro fastpitch softball team. In early January, the Bandits learned their 48-game season would be canceled due to the ongoing presence of COVID-19, and the fact that nearly half of the league’s players planned to compete in the Summer Olympics in Tokyo. Then on Aug. 1, National Pro Fastpitch (NPF), home of the Bandits, said it was suspending operations effective immediately. With operating revenue severely limited by the pandemic, two days later the Bandits decided to disband team operations. All this, after last year’s season was also canceled. Local softball fans’ thirst for action wasn’t totally dried up: the Athletes Unlimited softball league played for a second year in August at Parkway Bank Sports Complex in Rosemont, home of the Bandits.

German-themed restaurant Hofbrauhaus, a staple in Rosemont’s entertainment district since its opening in 2012, closed on Jan. 31. News of the impending absence was short-lived, however, as the Journal reported at the time Crust Pizza had plans to occupy about 13,000 sq. ft. of the building on Park Place, with another business eventually filling the remaining 7,000 sq. ft. That business, it was learned in the spring, would be Pete’s Dueling Piano Bar, which had closed at another location in The Park because of COVID-19. (The former Pete’s building became a Verilife cannabis dispensary — the village’s second adult-use marijuana store.)

Despite the lingering threat of COVID-19, Rosemont Elementary School reopened after the New Year’s holiday. Meanwhile, students and staff started returning to East Leyden High School early in the year, where hybrid learning continued due to the pandemic. Plans slowly took shape over the upcoming construction of a new Rosemont School building in the same location as the current building that dates back to 1960. Work to clear the way started in May with draining of the indoor park district pool on the school grounds. Voters last year approved a $40 million referendum for the new school. Back at Leyden, complaints mounted at the start of the new school year in August over social distancing requirements, overcrowded buses and the wearing of masks.

EarthMed, Rosemont’s first cannabis dispensary, opened in January at 10441 E. Touhy Avenue…Rosemont’s AMC movie theaters reopened Jan. 29 — with limited hours and capacity — after closing in November 2020 due to COVID…Wolff’s Flea Market returned to the Allstate Arena parking lot on Sundays after a one-year-hiatus…A group of Rosemont paramedics in February was honored for saving the life of a resident who stopped breathing, preventing “a rapidly impending cardiac arrest”…Wizard World Comic Con returned after its COVID hiatus, bringing huge crowds to the Donald E. Stephens Convention Center in late August…Rosemont Public Safety launched the village’s “Rosemont Cares” and “Smart911” initiative in June…the Rosemont Cavaliers Drum & Bugle Corps highlighted the return of the annual Rosemont Voters League picnic in July…Michael Amadei was named the next superintendent of Des Plaines School Dist. 62, which serves Rosemont north of Devon Avenue…Rosemont School Board members hired a consultant in November to begin the search for the district’s next superintendent.